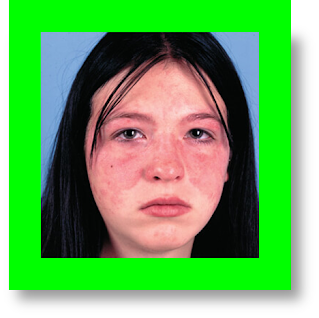 Certain medications may induce an autoimmune response that is in some ptns can result in a clinical syndrome with features simulating systemic or cutaneous lupus erythematosus, called drug-induced lupus. More commonly, these agents induce autoantibodies with no induction of a clinical insult. Drug-induced lupus (DIL) can be simulating spontaneous (idiopathic) SLE, but there’re some differences in clinical & immunologic features as well as the frequency of each feature. The demographic criteria of DIL mostly relying upon the population most likely to receive the relevant agent, and the risk for evolution of drug-induced lupus varies primarily between different drugs. Mechanism of disease evolution still uncertain and may vary from one agent to another and classes of drugs. Individual ptn criteria influencing the risk, depend mainly upon the culprit agent, including genetically determined impact upon drug metabolism, whether or not a ptn is a slow acetylator in particular (with decline in hepatic synthesis of N-acetyltransferase), and other immunogenetic criteria.

The auto-AB or its patterns that’re seen largely depending upon the culprit agent, but certain drugs may have an associated antinuclear AB that hv specificity for histone proteins, while with disease due to other drugs, AB that’re more often seen with idiopathic SLE (e.g., anti-double stranded [ds] DNA AB) or with systemic vasculitis (eg, anti-neutrophil cytoplasmic AB) may be present. Drugs associated with the highest risk of inducing lupus in an individual ptn include: procainamide, hydralazine & penicillamine. Other agents known as definitely inducing DIL: minocycline, diltiazem, INH, quinidine, anti-tumor necrosis factor (TNF) alpha gents, interferon-a, methyldopa, chlorpromazine & practolol. A variety of agents have been implicated as probable or possible, but not definite, causes of DIL, including anticonvulsants, antithyroid drugs, anti-microbials.

Ptns with DIL may show a variety of systemic manifestations. The most common: fever, myalgias, arthralgias, arthritis, & serositis. Frequency of these manifestations are variable with each drug. Hematologic alteration and more severe manifestations, e.g. renal disease & CNS involvement, are uncommon, but can be seen. Liver dysfunction have been observed, particularly in ptns with minocycline-induced lupus. Cutaneous manifestations are much less common in DIL as compared to idiopathic SLE, although subacute cutaneous lupus erythematosus (SCLE) is usually drug-induced.

SCLE may be drug-induced in a substantial percentage of ptns, & drug-induced SCLE is distinct from the typical DIL syndrome. Majority of ptns with drug-induced SCLE are anti-Ro/SSA-+ve. Drug-induced SCLE typically seen with an annular or psoriasiform, photo-distributed cutaneous eruption. Medications commonly seen with SCLE may include hydrochlorothiazide, CCB, ACEI, statins, anti-TNF-alpha agents & proton-pump inhibitors. DIL should be suspected if a ptn taking one or more of the suspect drugs for at least one month, and more often much longer, seen with combination of arthralgia, myalgia, malaise, fever, rash, and/or serositis. At least one feature typical of SLE should be present, but ptns with DIL usually do not exhibit  enough number of manifestations to satisfy criteria for idiopathic SLE. Diagnostic evaluation of ptns with suspected DIL should be similar to that experienced in ptns suspected of idiopathic SLE. Confirmed Dgx is difficult to attain, however, because of the clinical overlap with the more common idiopathic disease. The "gold standard" is spontaneous resolution of clinical manifestations, typically several weeks/months after the culprit drug has been withdrawn.

In ptns with drug-induced systemic or cutaneous lupus, the initial step in ttt is to hold the culprit medication. Control of the specific disease manifestations primarily until they resolve using the same protocols applied in ptns with idiopathic SLE & SCLE:

v  In most ptns with arthralgia, arthritis, & serositis: NSAIDs can be utilized. Cutaneous eruptions can be ttt with topical applicants, including topical steroids

v  In ptns in whom constitutional, cutaneous, or musculoskeletal Sms & findings do not clear within 4-8 wks following withdrawal of the offending agent,   start therapy with hydroxychloroquine. Treatment should be continued until all disease manifestations have been resolved.