An abnormal urinalysis (hematuria and/or proteinuria) with or without increased plasma Cr concentration can be seen in the majority of ptns with SLE. 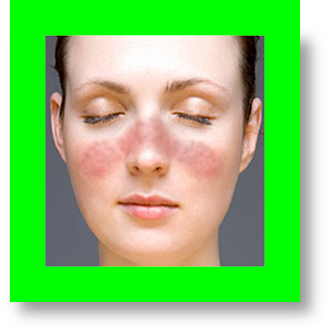 An abnormal urinalysis (hematuria and/or proteinuria) with or without increased plasma Cr concentration can be seen in the majority of ptns with SLE. The most frequent observed abnormality is proteinuria. A widely used classification system of lupus nephritis (LN) divides the glomerular disorders into VI different patterns/classes according to renal biopsy findings.

1)    Class I: minimal mesangial LN: mesangial immune deposits recognized either by IF alone or by IF & EM, but without LM abnormalities. Ptns with class I generally present with a normal urinalysis & SCr concentration.

3)    Class III: focal LN: defined by LM finding of endocapillary or extracapillary glomerulonephritis (GN) involving < 50 % of glomeruli. Lesions are seen with focal subendothelial deposits on EM. Class III is further categorized according to lesion chronicity. Hematuria & proteinuria are commonly seen in almost ALL ptns, some ptns show NS, HT, and/or increased SCr. Progressive RI is uncommon if < 25 % of glomeruli are affected & if glomeruli show only segmental proliferative areas with no necrosis.

4)    Class IV: diffuse LN: > 50 % of glomeruli show endocapillary with or without extracapillary GN. It‘s further categorized into segmental (IV-S) & global (IV-G) depending upon if glomeruli show segmental or global lesions, resp.. Further subclasses of class IV are given according to lesion chronicity. Hematuria/proteinuria are present in ALL ptns with active disease, and NS, HT, and RI are commonly observed.

5)    Class V: lupus membranous nephropathy: diffuse thickening of glomerular capillary wall on LN and by subepithelial immune deposits on IF or EM. Despite subendothelial deposits can be seen by IF or EM alone, the presence of these deposits (by LN) requires a combined Dgx of class III or IV + V diseases. Ptns primarily seen with NS, despite hematuria and HT may be seen. At presentation, SCr is usually normal or slightly raised. 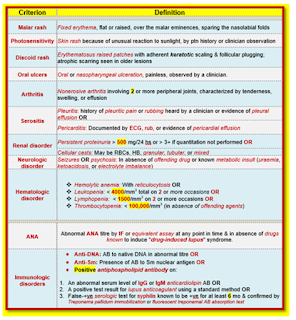 v  Some ptns with LN have histologic findings of a superimposed ANCA-associated GN, with prominent necrosis & crescent formation & minimal or absent endocapillary proliferation or subendothelial deposits. Tubulo-interstitial disease usually occurs with concurrent glomerular affection and is sometimes the only manifestation of LN. Ptns present with a rising SCr and a relatively bland urinalysis. Sns of tubular dysfunction may be observed.

v  Silent LN: presence of mesangial, focal, or diffuse proliferative GN in ptn with no clinical evidence of kidney disease. It’s rare and with benign outcome.