Xn are cholesterol-filled, soft, yellowish plaques that often seen on the medial aspect of the eyelid that mostly observed in middle-aged & elderly. 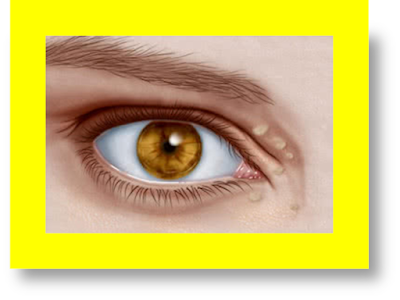 Xn are cholesterol-filled, soft, yellowish plaques that often seen on the medial aspect of the eyelid that mostly observed in middle-aged & elderly. Xn are usual associates with hypercholesterolemia (Hc), so we should obtain a lipid profile if ptn has not already received. Dyslipidemia can be observed in almost 50 % of adults with Xn. Xn are a classic feature of primary biliary cholangitis, a condition that usually associated with severe Hc. Xn are common in ptns with primary aberrations of low-density lipoprotein (LDL) cholesterol metabolism (e.g., familial Hc, hyperapobetalipoproteinemia). The observation of Xn in young subjects, particularly children, should alert the physician the presence of an underlying inherited dyslipidemia. Ptns with a normal lipid profile, an associated Xn & atherosclerosis (AT) cannot be explained. Some reports have found lipoprotein abnormalities other than Hc that may augment the risk of CAD (coronary heart disease) (e.g., low HDL (high-density lipoprotein cholesterol) in ptns with Xn. Xn plaques often do not need ttt. Lipid-lowering agents may induce regression of Xn in some ptns, but the effect is not consistent. Surgical removal, CO2 laser therapy, or topical trichloroacetic acid (TCA) can be applied for cosmetic appearance, but recurrent Xn is commonly observed. 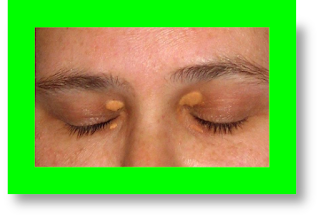 Frequent but not all ptns with atherosclerotic RAS show CKD that’s primarily due to reduced renal blood flow (RBF) induced by the stenosis. Generally, clinical progression of CKD (increasing SCr) observed if the stenosis affects the whole renal mass. So, ptns with CKD due to AT-RAS usually exhibit bilateral high-grade stenosis of renal arteries or stenosed vessels of a single functioning kidney. However, RAS may be an "incidental" finding in CKD ptn induced separately (e.g., by diabetic nephropathy). It is difficult to DD between disease induced by RAS and those related to other causes of CKD. CKD caused by atherosclerotic RAS is commonly called ischemic nephropathy (IN). Generally, “IN " may refer to a reduced GFR owing to any cause inducing reduction in RBF. However, this term is mostly applied to ptns having CKD related to partial/complete obstruction of one or more extra-renal arteries, often with AT disease. Despite a moderate reduction in renal perfusion pressure (up to 40 %) and in RBF (mean 30 %), GFR is reduced but tissue oxygenation within renal cortex & medulla can adapt with no development of severe hypoxia. However, more intense vascular occlusion, up to  70-80 % occlusion of renal artery, will lead to evident cortical hypoxia. In animal reports, tissue hypoxia may induce rarefaction of microvessels with activation of inflammatory & oxidative pathways that ultimately lead to interstitial fibrosis. Long-lasting lesions , however, with inflammation & fibrosis became irreversible.

2)    Absence of any evidence related to an alternative etiology of renal disease, e.g., abnormal urinalysis, proteinuria, paraprotein, or nephrotoxic agent.

3)    Findings in favor of reno-vascular disease:

4)    Risk factors for AT usually present, e.g., hyperlipidemia, smoking & age > 50. Ptns with IN frequently have CAD or PVD.

Ptns with clinical suspicious of IN, a presumptive Dgx can be made if via radiologic document of significantly stenosed both renal arteries and one of them to a single functioning kidney. There’re 2 diagnostic criteria to that can impact ttt decisions:

·         Current renal function such that restored RBF is likely to improve function? Condition of the kidneys can be evaluated by recognizing:

-  None of these parameters may predict the precise outcome of revascularization.

Final Dgx is not usually established. Confirmed Dgx is relied primarily upon stabilized/improved GFR after successful revascularization. Ptns with risk of bilateral RAS are also at risk for many disorders with similar clinical findings but cannot be managed by surgery/angioplasty, e.g., HT nephrosclerosis & atheroembolic renal disease. Once a presumptive Dgx of IN is established, ptns should commence medical ttt to manage HT & the routine CKD care. Since these ptns have AT CVS disease, they should be aggressively ttt for secondary prevention of CVS with aspirin, statin, smoking cessation, and, in diabetics, glycemic control. Adding to medical therapy & risk factor control, some but not all ptns should proceed to revascularization (via percutaneous transluminal renal angioplasty + stenting or, in selected ptns, via surgical interference).