Amyloidosis is a collection of disorders that are characterized by extracellular deposition of amyloid fibrils. 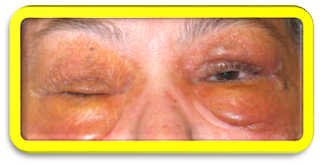 Waxy appearance of intradermal amyloid deposition around the eye

Clinical presentation of kidney disease is variable according to the location & magnitude of involvement. The most common presentation of AL & AA amyloidosis is heavy proteinuria that is commonly associate the glomerular deposits. Ptns with vascular disease often show: slowly progressive CKD with little or No proteinuria. Less commonly, ptns with tubular deposits usually show tubular dysfunction e.g. type 1 (distal) renal tubular acidosis or polyuria due to nephrogenic diabetes insipidus, and in rarely, Fanconi syndrome. Crescentic GN is very rare.

Ttt according to the type of amyloidosis. Ttt of AL amyloidosis is directed at clearance of the monoclonal protein & plasma cell clone that > reversal of organ failure. Factors influencing the renal response to ttt include the magnitude of baseline proteinuria & SCr. Ptns progressing to ESRD can be ttt with either DX or KTx. HDX & CAPD seem to be equally efficacious. Prognosis for those requiring DX is not optimistic, despite somehow better for ptns with AA in comparison to AL amyloidosis. Expert opinions with KTx is mainly confined to AA & AL amyloidosis. Limited data suggesting graft survival is similar but ptn survival is lowered in AA amyloid disease as compared to other types of kidney disease. Recurrence of amyloid deposits in the allograft seen in 20-33 % of cases due to persistent activity of the underlying disease, but graft loss due to recurrent disease is NOT common. KTx is reasonable in selected AL amyloidosis ptns.