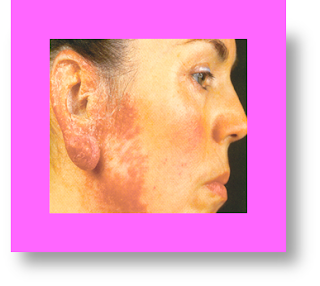 Risk factors: LV is the most common type of cutaneous TB in Europe and certain zones in India. In contrary, scrofuloderma seems to be more observed in some tropical zones. LV can occur in ALL ages. It is not certain why females are 2-3 times more likely as compared to males to be involved. LV has also been observed in ptns with previous TB verrucosa cutis, scrofuloderma, and rarely as a sequela of BCG vaccination or primary inoculated TB. Despite the most commonly causing organism is M. TB, there’re documented cases related to M. bovis, & clinical picture is simulating LV related to M. TB. Subjects at risk for M. bovis LV are the resident in rural zones, contacting cattle, or consuming infected milk products.

Clinical presentation: clinical findings of LV are variable. Typical plaque presentation starts as a collection of discrete, red-brown papules with subsequent coalesce to be an indolent, asymptomatic plaque. The plaque gradually extends peripherally to reach 0.5-10 cm with central clearance & atrophy. Lesional borders may show serpiginous or verrucous quality. Hypertrophic, ulcerative, & vegetative form of LV can be also be seen. Lesions with secondary infection may show a seropurulent discharge with crust formation. In the West, LV often observed on the head & neck, while in tropical & subtropical zones, lesions are commonly seen on the lower limbs or buttocks. Similar to other granulomatous lesions, e.g., sarcoidosis & leprosy, diascopy (examining the lesion with compression via a glass slide) of non-hyperkeratotic areas of LV usually show a yellow-brown color known as an "apple jelly". However, it is difficult to observe with dark skin.