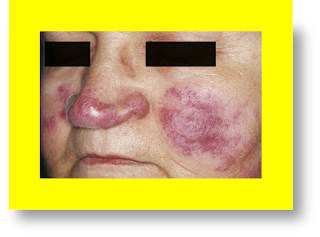 Lupus pernio (LP) is a violaceous or erythematous indurated papules, plaques, or nodules that’re mainly observed on the nose, cheeks, chin, & ears. LP is associated with a higher risk for nasal involvement with Sc

2)    Cutaneous affection is seen in about 25 % of Sc ptns and usually an early finding.  Sc can cause anterior, intermediate, & posterior uveitis, in addition to retinal peri-phlebitis.

4)    Sc can involve the larynx, pharynx, nares, and/or sinuses and should be suspected in all ptns with systemic Sc and upper respiratory tract Sms.

5)    Cardiac Sc may be benign, incidentally observed or a life-threatening state leading to sudden death. The spectrum of Sc cardiac affection may include heart block & arrhythmias (due to involved conducting system), HF, valvular malfunction, & pericardial disease. Initial asessment should include an ECG.

6)    Acute polyarthritis due to Sc typically induce symmetric affection of the ankle joint, but can affect other joints. A characteristic criterion is extension of the swelling to involve the soft tissue around the joint, leading to peri-arthritis rather than a true arthritis.

7)    Neurologic affection seen in about 5 % of ptns with Sc and could be the presenting feature. Clinical syndromes may include cranial mononeuropathy, neuroendocrine malfunction, a focal/multifocal encephalopathy, myelopathy, hydrocephalus, aseptic meningitis, peripheral neuropathy.

8)    Löfgren syndrome (LS) is a combination of erythema nodosum (EN) + hilar adenopathy + migratory poly-arthralgia + pyrexia. The presence of all features of LS has almost 95 % specificity to diagnose Sc. However, EN with no added features has a wide DD. Painless swelling affecting salivary & parotid glands seen in 5 % of ptns with Sc.

Alterations related to Ca+ metabolism are the most commonly seen renal & electrolyte changes observed among Sc ptns. Abnormal Ca+ metabolism can lead to nephrocalcinosis & nephrolithiasis. Other relatively common renal complications may include interstitial nephritis & MN. Clinically determined GIT lesions seen in < 1 % of ptns with Sc. Affected areas may include the esophagus, appendix, colon, rectum, liver, pancreas, & rarely small intestine. Routine monitoring of Sc may include evaluation for the types of extra-pulmonary Sc that can induce organ or life-threatening disease, despite the validity of this monitoring has not been totally formalized.

Sc interstitial nephritis is more commonly observed on the initial presentation of Sc, rather than ptns with chronic disease. Dgx is suggested by the combination of high Cr level + bland urine sediment in a ptn with known or likely Sc. Kidney biopsy reveals normal glomeruli, mononuclear cell infiltration, & non-caseating granulomas. Despite the renal granulomatous infiltration is not commonly seen, it’s rarely a single cause of kidney dysfunction. Other sequelae of Sc include MN, a proliferative or crescentic GN, FGS, polyuria (owing to nephrogenic and/or central DI), HT, & some tubular deficits.